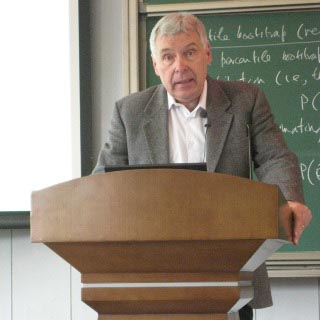 The memory of Professor Hall

Professor Peter Gavin Hall,  Fellow of Australian Academy of Science, Fellow of the Royal Society of London, and Foreign Member, National Academy of Science of USA, passed away on January 9th, 2016 in Melbourne.  He earned his Doctorate at the University of Oxford in 1976, and had held faculty positions with University of Melbourne (1976-1978, and 2006-2016 as an ARC Laureate Fellow), Australian National University (1978-2005). He also had a joint appointment at University of California Davis prior to his passing away.

Peter has made profound contributions to Statistics as well as to  Mathematics, Economics, engineering, physical science and biological science. Mathscinet lists him with 606 publications and 240 distinct co-authors. He is a very kind person, have mentored,  helped and influenced many people in Statistics. Peter has also devoted much energy to the advance of Statistics discipline world-wide.

Let us share our memory of Professor Hall at this site.

To friends and colleagues of my beloved husband, Peter Gavin Hall,

I thank you for your warm tributes and fond recollections of Peter. He is special to me, but I had no idea how special he was to his world of mathematics and statistics until now. I read your messages with tears in my eyes, and a realisation of the inadequacy of any response that I could make.

To the many who came from near and far to join me at Peter's funeral service at the Chapel of Reflection at Springvale Botanical Cemetery in Melbourne, Australia, on 28 January 2016, I thank you for making the journey, for the honour you extend to Peter, and for your warmth and kindness towards me. To the many around Australia and overseas who were unable to attend, I thank you for your moving messages and for your beautiful remembrances.

With love in my heart,